(Note: this article follows on from our main study - Start Here)

Intro: So why were there two extra Holy Days added in the books of Leviticus and Numbers for Israel to celebrate? …..???

At this point a controversial subject arises. It has been shown that God has given his people Holy Days to use in the worship of Him. It was shown in the book of Exodus three seasons were allocated for Holy Days. Ex.23:14 says: “Three times……ULB, HARVEST & Ingathering.” These days were integral with the OLD COVENANT given at Mt. Sinai and consecrated with blood of animals by the young men. Once consecrated with blood, nothing could be added or taken away. (Deut 4:2 & Deut 14:32)

Now after the priesthood was established in the next year (Lev.8:1 and Lev 40:17) two extra Holy Days are added to the religious order of celebrations. Looking at Lev 16:1-29 and Lev 23:23, it is clear that God included two extra days for the Israelites to celebrate. They are reiterated in Numbers 29:1 & 7. What could the meaning of the addition of these two days represent and to whom do they apply? We need proof from scripture here, not tradition or speculation from other sources.

The giving of the law and commandments at Mt. Sinai  was the culmination of a momentous day. The mountain quaked, fire went up and smoke shrouded the area. The sound of blowing made the people tremble as thunder and lightning added to the event. The time this happened was mentioned in Ex19: 1, “on the third moon…..” So the nation was only three months established when this happened. When the day of Trumpets (‘blowing’ Strong’s 8643 ‘sounded like trumpets’) was recorded, it was AFTER the Tabernacle tent was erected and the priesthood instigated!

So what was it instigated for? Well obviously God had given the Israelites a memorable day to celebrate the giving of the OLD COVENANT just like we have a memorial day to remember an important event in our nation’s history.

The following helps to explain the day and why it was important to them.

THE FEAST OF TRUMPETS

What is the meaning of the Feast of Trumpets, and who should observe it? Most booklets on this subject explain that this day represents the return of Jesus Christ at the end times. The opening paragraph almost always says, this is the day when we look forward to a time when Christ returns and sets up the kingdom of God on earth. The next sentence usually refers to Leviticus 23 where it says it is a memorial of blowing of trumpets. Numbers 29:1 also mentions it but only says they were to blow trumpets. There is no evidence which points to Christ returning in either scripture only blowing of trumpets. How can a doctrine be established on this evidence or lack of it?

Rather than create a meaning to suit a doctrine or idea just because the word trumpet appears, we should get the facts from the Bible itself. It is important to know what the scriptures say in this regard. The meaning of the Hebrew number for ‘blowing of trumpets is’ 8643 ‘teer-oo-aw’ and it means clamour, that is, acclamation, a holy convocation.

In Numbers 29:1 it says it is a “day of blowing of trumpets to you”. This word 8643 comes from the Hebrew word ‘ruwa’ (7321) and means ‘to mar, to split the ears (with sound), i.e. to shout, blow an alarm, cry aloud’. Doesn’t include anything to do with a warlike situation, rather a preparation for an announcement.

When it says, “a memorial of blowing of trumpets” what does it mean? According to all the booklets (produced by the Churches of God), straightaway they look to the future when Christ returns, but consider the word ‘memorial’. Why look forward instead of looking back, as a memorial does?

Let’s look at an example we are all familiar with. In Australia we have a solemn observance, it’s called ANZAC DAY. Using Biblical language, let’s apply this example to Lev. 23. “On the fourth Month, [April] on the 25th day of the Month we shall have a solemn observance. It a memorial of a landing on a beach in Gallipoli in Turkey. There will be a solemn ceremony at all cenotaphs in Australia and New Zealand”. All will be observing ANZAC DAY. This is a very solemn day and to arrive at the meaning of it, all we have to do is look back through military and national history and we can easily find the tragic beach landing in world war one, in Turkey that will be hard to forget.

Now let’s look at Leviticus 23, there we have God telling his people to observe a day which is an event which happened in their short history as a nation. Can we find an event in the three months from Egypt that could fit the category of blowing of trumpets (‘clamour, noise, ear splitting sound’) as explained? It is, of course, the day mentioned in Lev 23: 23 – the Day of Trumpets!

This Holy Day was to be kept as long as God had a covenant with his chosen people. The story of their infidelity and subsequent divorce is recorded in scripture. But there was a new and better covenant coming. The book of Hebrews tells us that “by so much was Jesus made a surety of a better covenant “ Heb. 7:22 and Heb. 8:13 “In that he said, a new covenant, he had made the first old. Now that which decayed and waxen old is ready to vanish away.”

Now this is where the question must be asked, if the day of Trumpets is a memorial to the making of the OLD COVENANT, to be observed by the participants of that covenant, and the New Testament Christians are under a new Covenant then what is the meaning for us today and why should we observe this day with a new and different meaning? There is no new biblical meaning!

Remember, the OLD COVENANT had sacrifices and a day to cover sins annually (Lev.16) so why designate it as the return of Christ and warfare? Just because the word trumpet (and wrongly described) is mentioned, it doesn’t have to refer to Christ’s return. To compare Lev 23: 23 to warfare is incorrect. The Bible clearly explains this day.

Most Churches who produce Holy Day booklets do not have a New Testament scripture when they are comparing holy day observance on The Day of Trumpets. That’s because all of the apostles and elders were teaching the NEW COVENANT as taught by Paul, received from Jesus personally.

As there are Jewish congregations worldwide it is correct to say that they can keep the DAY OF TRUMPETS while they are under the OLD COVENANT, because they are still in that state of belief, blinded to the fact that the Messiah has come, and they are still waiting for the return. But it seems evident that they don’t observe this day as the giving and the making of the OLD COVENANT either as the Bible shows, but as a day to celebrate the New Year, (Rosh Hashanah) and blow trumpets, whilst adding 10 days of awe, which isn’t Biblical.

Observing the day as the return of Christ is inaccurate as there is no future event mentioned in the two scriptures in Lev.23:23 and Num:28.1-7 and it cannot be regarded as a Holy Day today, as it was not included in the Holy Days of Ex.23:14 (not ratified with blood with the rest of the OLD COVENANT) or in the New Covenant in Deuteronomy. (See our main study ‘Secret of the Covenants - Start Here‘) The meaning of the day was a day given to God’s people, at that time, to celebrate the giving of the OLD COVENANT, likened to a Remembrance Day we observe as a national day.

Now we must address the other issue which arises; The Day of Atonement was also instigated while Israel was in the wilderness at the same time the Day of Trumpets was added to the Holy Day list. (Lev. 23:1-23 & Num.29:1)

Israel had exited from Egypt and was camped at Mt. Sinai in the third month. Whilst Moses spent 40 days on the mountain receiving the Ten Commandments and Ordinances, the people became restless and the golden calf incident occurred. God had already known the people were not perfect or sinless even after the incredible miracles they had witnessed so he created a way to atone (cover) them of their sins.

So, once a year, they were required to observe the DAY of ATONEMENT. As stated previously, atonement means covering, (for example Noah ‘atoned’ the ark with pitch or asphalt to make it waterproof. Gen.6:14) and this was the method God would instigate for the people so that their sins could be forgiven, albeit temporarily for one year.

The procedure was a series of sacrifices representing the cleansing of the high priest, his family, the temple and the congregation. See the  'Leviticus 16 Chart' (a verse by verse map of  the sacrificial ceremony)... The people were able to go to the tabernacle once a year and their sins were covered (Strong’s 3722) and this was forever as long as they were a nation under God’s guidance and obeying His laws, (which they didn’t). Because this day was an extra Holy Day given to the congregation in the wilderness, it had a special meaning for them and still does to this day for the Jews of the OLD COVENANT. Remember, it was not part of the ratified covenant at Sinai and nothing can be added or taken away (Deut 4: 2 & Deut 12: 32)

So, what can the meaning be for us today as Christians? Well, while the Israelites were covered for one year, it was a temporary fix for a serious problem. Not so with our merciful God, he offers us a permanent fix, which is forgiveness of sin through accepting Christ as our saviour. The death of Jesus Christ was the ultimate sacrifice for ALL mankind and it only had to occur once and for all! (Heb.9 :26)

Therefore the meaning of the DAY of ATONEMENT is clearly shown. It was a day Israel had to celebrate, with fasting, and their sins were covered for one year. For Christians, our sins are forgiven the day we were baptized and our covenant renewed at Passover each year when we recommit our lives to follow Jesus Christ until his return, (1 Thess:16-18). But those who continue observing the Day of Atonement each year shows that they are continually looking for the day when Christ will abolish sin forever. But he did that 2000 years ago!!

Hopefully, the explanation of how these two added holy days were part of the Israelite religious system and clearly defined as such and are not part of our Christian walk. We are warned in all four Gospels about putting new wine in old wine skins, (Matt 9: 17, Mark 2: 22, Luke 5: 37)  as in adding OLD Testament practices to NEW Testament directions. You can’t mix old with new!

The OLD COVENANT is still applicable to those who are under it, but the SECRET OF THE NEW COVENANT reveals that the OLD is fading, and one with better promises is replacing it. 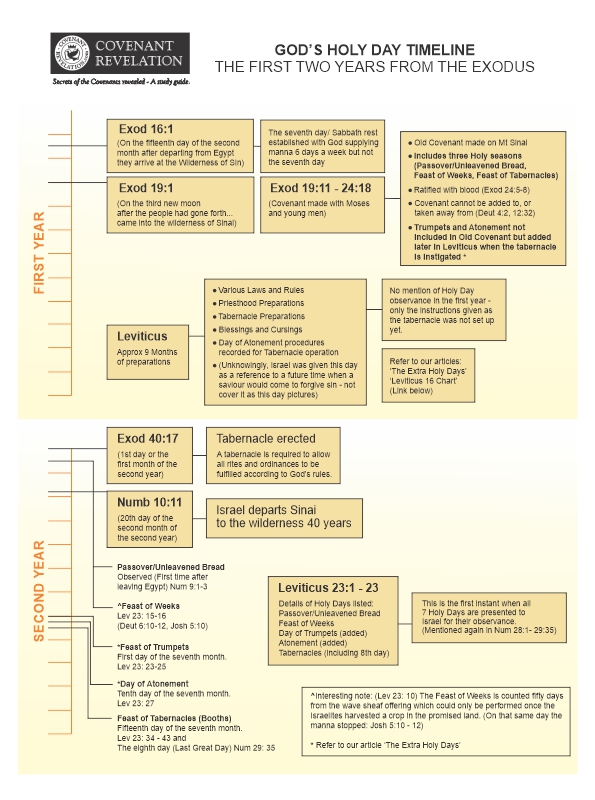