This easy to read chart shows all the events which occurred at the Tabernacle on the Day of Atonement.

Follow the sequence of events as per the boxes and the accompanying scriptures to reveal the meaning of the ceremony. 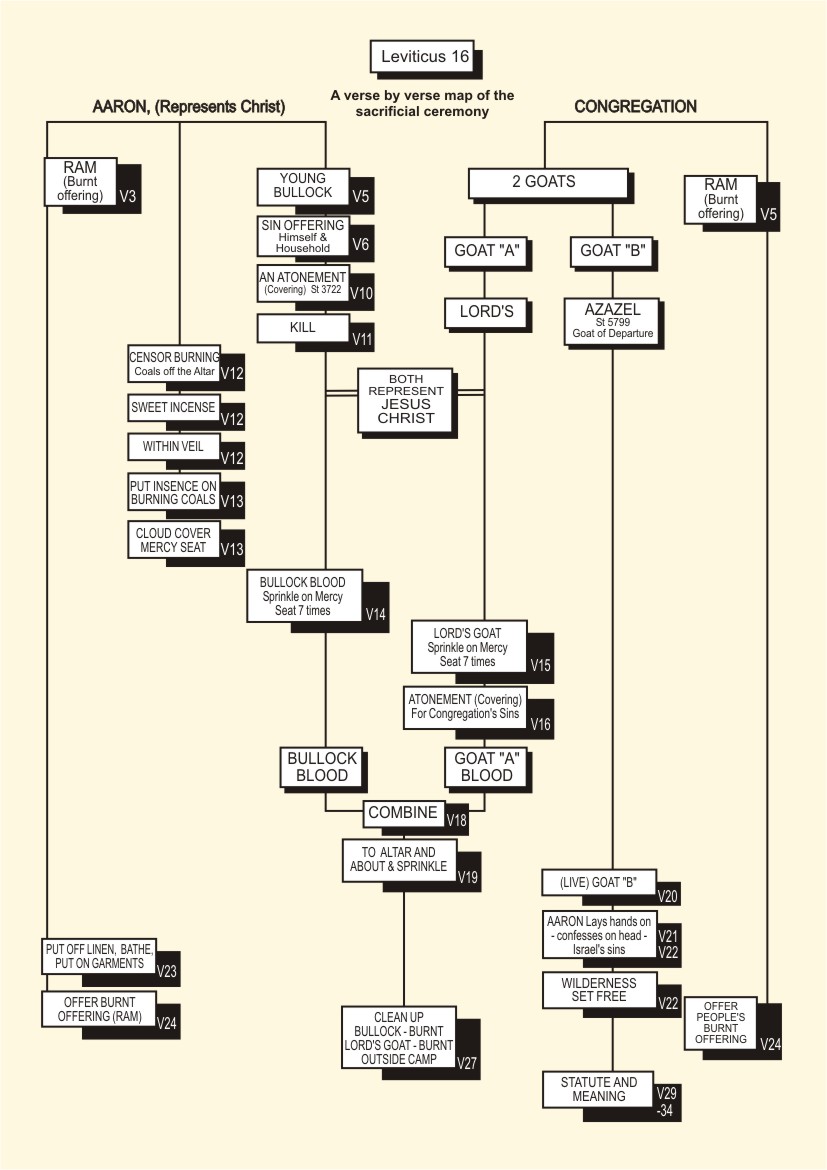 In this chart it is given in stages: cleansing of sin for the high priest; his household; the temple/tabernacle; the congregation; Jesus Christ's death; then in the future the rest of mankind.

In the book of Leviticus 16 we are shown a strange ceremony that was given to the people (after the Exodus) not long after the Covenant was given on Mt Sinai (Exod 24:4-8).

Exodus reveals that the Old Covenant was made with the people of Israel 3 months out of Egypt.

The chart above shows the procedure the High Priest followed and the relevant scriptures in the Bible.

This day was given to God’s people to observe once a year so that they could be cleansed of their sins, by means of covering them. They were not forgiven permanently, only covered.

This ceremony was performed yearly and added to the Holy Day list in Leviticus 23:26 and Numbers 29:7.

Azazel is the “Goat of Departure” – we need to show what happens when this goat departs to the wilderness – by looking at the chart you will notice that goat ‘B’ or goat ‘2’ avoids the cleansing and coverings of the high priest and people, so it seems, that it misses out on its cleansing and forgiveness of sins!

Goat ‘B’ which is sent into the wilderness represents those that aren’t there, but those of future generations and all of humanity. (Rom 11:15, 2 Pet 3:9)

Being sent into the wilderness it only receives Aaron’s confession of sins but will at some point in the future receive the promise of redemption by the sacrifice of the real Lamb of God – Jesus Christ! But until then, like many that haven’t received Christ yet, is wondering in the wilderness.

The analogy for Christians is apparent. In our main study 'Secret of the Covenants' (Start Here) we have a pattern which emerges with the same theme - God's plan offering salvation to all.